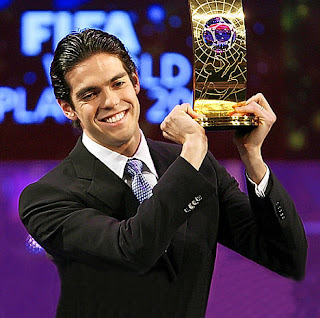 Ricardo Izecson dos Santos Leite Or he is better known as Kaká. He got his nickname “Kaká” because his little brother Rodrigo could not pronounce the word Ricardo when they were young. Rodrigo called his older brother “Caca” which Ricardo later changed to “Kaká” Kaká began his club career with São Paulo at the age of eight. He signed a contract at fifteen and led the SPFC youth squad to Copa de Juvenil glory. Kaká made his senior side debut in January 2001 and scored twelve goals in 27 appearances.

At the age of eighteen, Kaká suffered a career-threatening and possibly paralysis-inducing spinal fracture . He risked his life by badly jumping off a diving-board which caused him the fracture of a vertebra. This could have meant the end of his football career but he believes Jesus allowed him to recover and become the star footballer he now is. For this reason, every time he scores he points his fingers to the sky as a sign of thank. Milan, fresh from winning the 2003 Champions League, brought him aboard in 2003 for €8.5 million, a fee described in hindsight as “peanuts” by club owner Silvio Berlusconi. Within a month, he cracked the starting lineup, and his Serie A debut was in a 2–0 win over A.C. Ancona.

Kaká’s career has flourished at AC Milan and his skills and talents were widely celebrated by the footballing world when he was awarded the Best Midfielder of the Champion’s League tournament in the 2004-2005 season, this despite Milan being beaten in the final by Liverpool. Kaká’s sparkling displays of footballing genius in the midfield position have seen football pundits drawing comparisons to Diego Maradona.

His greatest goal is considered to be the one he scored against Fenerbahçe SK in AC Milan’s first game in the 2005/2006 Champions League; won 3-1 by the Rossoneri . Kakà started his run from midfield and skipped past three tackles before entering the area and finishing with a low shot under the goal-keeper. At only 24 years of age Kaká’s talents have seen him become a respected player in both the European and International stage playing for both club and country.